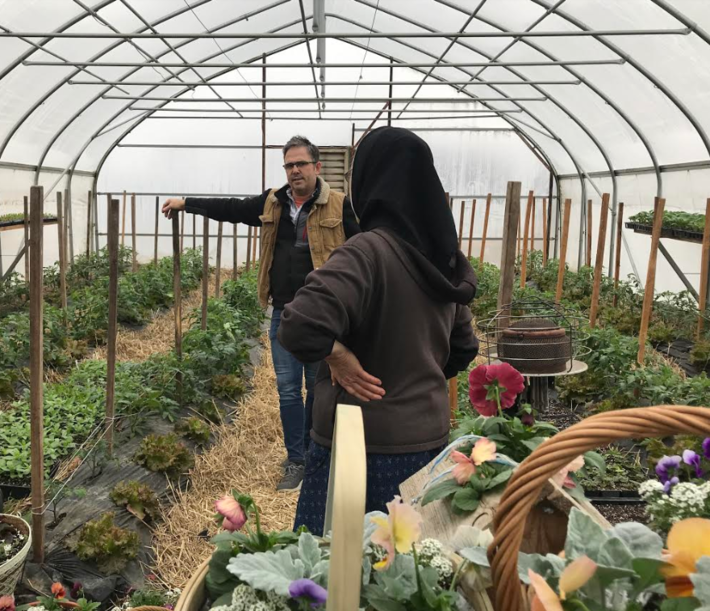 When Table Comes To Farm

JERUSELEM – A few flakes of snow still fell as the chef and the Mennonite farm wife walked across a nicely manicured path in March.
They entered the green house and were engulfed in warmth all wish was felt outside.

Inside was a time machine of sorts, rows of corn, flowers, and seedlings pushing through the soil in the starter trays. Onions, peppers, squash and rows of tomato seedlings that will be sped by this early indoor start to the farm stand that helps fuel the Hoover family’ s ascetic life in these open fields west of Penn Yan.

For years, virtually all of this farm’s vegetables were sold from a stand at the edge of their property. So far from any significant population, it was hard to see how a family could thrive, but their cookies and baked goods and the quality of their produce has drawn locals and has become a regular stop for even Rochesterians transiting to Ithaca and points south.
“We sell it all,’’ Doris, the understated mother of ten says.

This recent chef’s visit, however, is a diversification for this enterprising Mennonite family. On this day, it is Brud Holland, a chef who has made his name in the region shaping local ingredients into high quality cuisine. But it could have been Max Spittler from Kindred Fare on Hamilton Street in Geneva or Sam Buyskes at the new F2T (Farm To Table) Restaurant at the Ramada. These farm-to-table chefs scour local sources to give their menus the best seasonal edge.

Holland now heads food operations at Fox Run Winery and has opened a new, lakeside restaurant – Sapalta – located at the new Plum Point Lodge on Seneca in nearby Himrod. For this new Sapalta endeavor, Holland is pushing the “farm to table” effort to the next level, bringing unique varietal seeds directly to the Hoovers, asking them to plant and grow what will be special ingredients in the new place’s cuisine; peppers that mimic the flavor of fiery habaneras without their heat, dwarf butter nut squash that concentrate its sweet flavor, local potatoes so creamy they don’t require butter.

This new mixing of restaurateurs and Mennonite grower started interestingly. The Hoovers looked at the relatively high price of these new varietal seeds and blanched a bit (no pun intended). But Holland pointed out the relatively higher price they could get from the chefs and a guarantee of purchase as the produce became available.

“And I think this will give the Hoovers some unique things to add to their farm stand,’’ Holland said as he inspected the seedlings. “We don’t mind if they sell these too. We want to support the farmers.’’

In fact, a tour of the Hoover farm is a lesson in the entrepreneurial and traditional nature of the Mennonite existence amid upstate New York’s otherwise modern economy.

Greeted on this day in the kitchen, the table was crowded with dozens of cookies just out of the oven, waiting for bagging. Snicker doodles, chocolate chips, gingerbreads. The bakery aroma just yards from the warm, earthy scents of the crowded greenhouses. And just around the corner, past the horse barns (no cars here, just buggies) is a metal working shop that thrusts you instantly back into scenes and scents from a 19th century industrial labyrinth. Here metal mammoth shaping presses and lathes reveal the way this community manages the hardest work of these large farms.

In the middle of the metal shop, a large machine stands finished and gleaming. It is a bed shaper designed to mound the soil while laying down the barrier cloth that prevents weed growth. It is at the heart of the Hoover’s plan to increase vegetable production.
Someone asks where the parts to this elaborate machine came from.
“We made them,’’ son Vernon responds.

He is not bragging. Just informing. In fact, the Hoovers, perhaps like many Mennonites, are sensitive to not bringing attention to the individual. They prefer photos -- if there must be photos -- that don’t identify them individually. And when explaining how they manage to create so much with their own hands, they speak shyly, ever humbly. 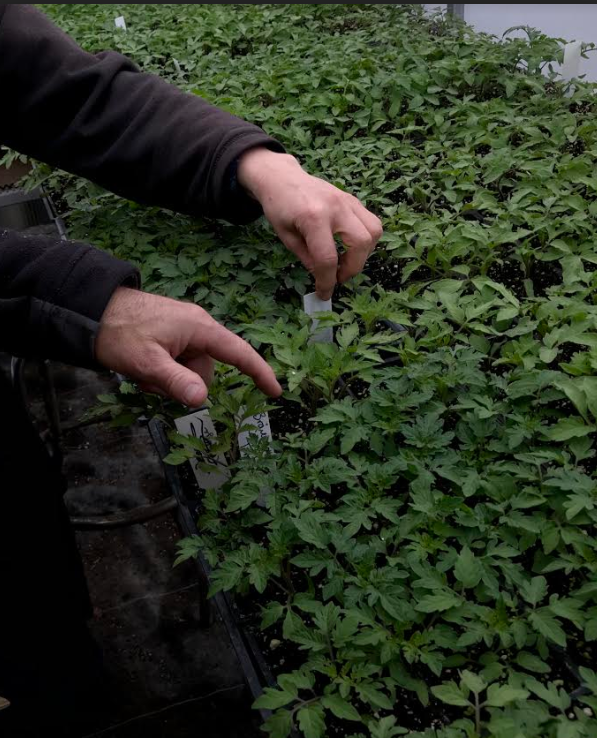 They travel in horse and buggy only, limiting distant distribution of any greater production. There is a farmer’s market not far away that can take excess produce, but demand and price there is not consistent.

So this new interaction with local chefs, and even the attention of an article like this, may be worth the unease they obviously feel with attention given to their beautiful efforts here on this picturesque countryside.

As chef and grower become more familiar, talk turns to the sort of handshake commitments that confidence brings. Holland shares his plan to grow Sapalta plums for his restaurant and the purchase of new young trees. He planted ten this week at Plum Point, formerly known as the Rainbow Cove Resort.

The Sapalta plum trees come with guidance from scientists at Cornell University’s AgriTech Campus in Geneva; they taught Holland and he now teaches the Hoovers.

The Sapalta trees, Holland explains, must be planted with a couple of other varietals to assure pollination and it will take a couple years to get the trees to bear fruit.

The Hoovers signal a willingness to give it a try, too, and a tree deal follows. Holland will deliver the saplings.
And, in a few weeks, the Hoover’s special vegetables – and eventually their Sapalta plums – will find their way into Holland’s Mother’s Day menu at Sapalta. And perhaps they will add new choices to a farm stand that sits so isolated, but so busy, at 1834 Briggs Road, Penn Yan. Chris Lavin is a former Finger Lakes Times reporter who wrote and edited for newspapers across the U.S. He is the executive director of the Boys & Girls Club of Geneva and writes occasionally for the Times.